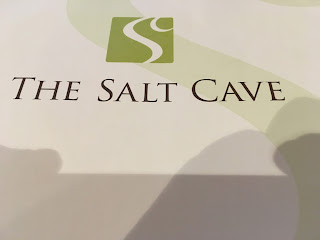 Yesterday I was invited into a special space one that I had not been in before.  I understood the principles of negative and positive ions which is why it is so important to have trees and nature around us when so many of our everyday lifestyle gadgets exude an energy that is full of positive ions.  That is hairdryers, toasters, central heating systems.

I moved into a new property 2012 – it was an amazing apartment so much so that when I joined Airbnb I was inundated with requests to stay there.  The apartment was renovated to a high spec – I had all the mod cons – did as I was told by my project manager but it wasn’t until living in the place I realise that the central heating combined with the double glazed windows meant no fresh air was coming in or out.  Yes one can open the windows but I realised for the first time that I was being affected by coughs and wheezing that I had never encountered before.

The air was so dry I could hear it in my voice.  So having a negative ioniser is a must in these kinds of environments as well as either a water fountain or even just bowls of water around the radiator. 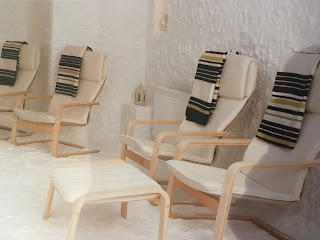 So, back to my special space above.  I heard about the salt caves and decided to review my experience.  The whole idea of the salt caves is to sit in them for one hour and allow the negative ions of the salt to clear out the nasal passages and balance out the over powering dryness created by how we live our lives today surrounded in such dry central heating systems that no wonder people suffer from asthma, continuous colds and flu.

I went into the room where it was explained salt was coming out through a machine but in a very fine way that it was not so visible.  Within minutes of sitting on one of the chairs above you could smell the air of salt and feel and taste it on your skin.

In this room were other people there was an agreed silence not to use any technology – fantastic – and nobody spoke.  I sat there for an hour and it was so relaxing – yes you can read if you want but I had no desire to.

Whilst the room was white with sand – explained it gave the impression it was salt – but the salt really was the stuff in the atmosphere – the lighting was at a level that created a warmth.  It was almost like being given permission to zone out of this chaotic world and agree to sit in a silence that recharged one’s batteries.

It reminded me of the room idea of Mr Selfridge for his employees creating a silent room where they could rest their minds and not have to speak and be away from the chaos of the cash registers.  Even though the salt cave is not about the rest or the silence but about salt absorption it had a double function which served the customer very well.

For those who like to experience this first hand themselves pop over to Duke Street, Liverpool  UK and book themselves a slot and for the rest of the world readers find yourself the nearest salt cave near you or why not start one of your own.

Spaces, places and caves create an energy that induces relaxation and health benefits and this one I visited certainly met that description.  Take care of yourself, take care of your health because truly that is your true wealth and if you want to know more about what I do pop over to www.wealthyspaces.com

This website uses cookies to improve your experience while you navigate through the website. Out of these, the cookies that are categorized as necessary are stored on your browser as they are essential for the working of basic functionalities of the website. We also use third-party cookies that help us analyze and understand how you use this website. These cookies will be stored in your browser only with your consent. You also have the option to opt-out of these cookies. But opting out of some of these cookies may affect your browsing experience.
Necessary Always Enabled

Any cookies that may not be particularly necessary for the website to function and is used specifically to collect user personal data via analytics, ads, other embedded contents are termed as non-necessary cookies. It is mandatory to procure user consent prior to running these cookies on your website.